As much as 2017 was the extreme in low volatility and consistent returns, 2018 saw markets live through several temper tantrums throughout the course of the year. This will be the first year in many where your year-end statements will show a loss. Although we do not like to see negative returns, these years are necessary and normal. We have lived through many corrections in the past which allows us to remain calm and productive during these periods. We will continue to focus on our research and our process that guides us. We have had a very strong start to 2019 and although it’s still early in the year, we are optimistic that the positive momentum will continue. 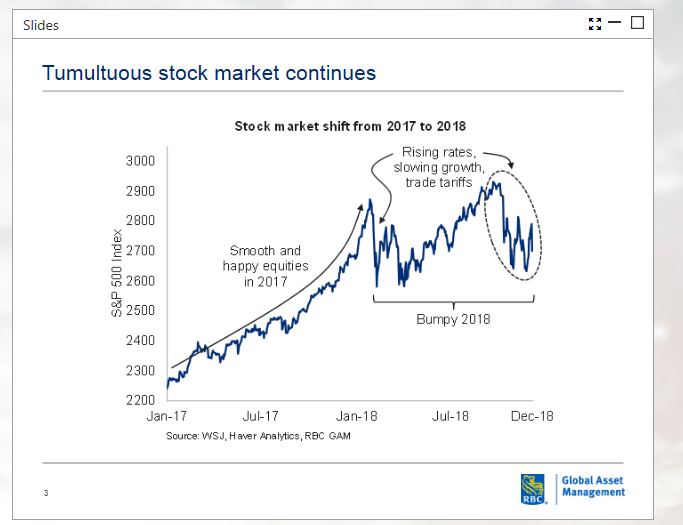 As 2018 has drawn to a close, it’s natural to reflect on the year’s challenges—in both the stock (equity) and bond (fixed income) markets around the world. Market volatility has materially increased during the past couple of months as investors digest the impact of rising interest rates, trade tensions between the world’s two largest economies, and political concerns relating to the Brexit end-game between the United Kingdom and the European Union.   Wise investing is founded in long-term objectives and understanding investments won’t always be on an upward trajectory. For every handful of positive-return years, there can be at least one less desirable. In the equity markets, corrections—measured by a drop of at least 10% from a recent high—can be nerve racking. But they’re quite common. Since 1945, the U.S. equity markets, as measured by the S&P 500, have seen a 21-point correction with an average drop from the peak of 14%, while lasting an average of five months. With the sell-off, some investors have started to wonder whether this is the start of a bear market—measured by a drop of more than 20%--or a classic garden-variety correction. Most bear markets are the result of a recession. Despite some negative sentiment, the global economy remains healthy, which has led to strong corporate profits throughout 2018. Researchers at UBS Securities examined 120 recessions in 40 different countries during the past four decades and found a common theme of a slowdown in consumer spending and productivity growth before a recession. Both spending and productivity growth have improved this year.

The opposite is true for bonds. Negative annual returns are quite rare. U.S. Government bonds have experienced only four negative calendar-year returns since 1974 and we have never experienced consecutive negative-return years. While 2018 has been a challenging year for bonds, with higher interest rates and less aggressive interest rate increases moving forward, it is unlikely that 2019 will buck the historical relationship.

The availability of information today has created many new challenges. Not all information is good, and this is no different when related to investing. Information relating to the so-called holy trinity, Fundamentals, Earnings and Valuations, are crucial in forecasting forward returns. Today, despite the constant negative news, this holy trinity seems to paint a positive picture going forward.

Benjamin Graham, the father of value investing and mentor to Warren Buffet once wisely said, “In the old legend the wise men finally boiled down the history of mortal affairs into a single phrase, this too will pass.”

As always, if you have any questions about the markets or your investments, please give us a call.